Oklevueha and the Lakota Sioux and Seminole Cultures

Historically, the Oglala and Lakota Sioux spiritual leaders Crazy Horse, Sitting Bull, and Fool Bull, Native American leaders and medicine men, maintained their spiritual traditions through a tenacious commitment in honoring their American Native culture, which is, honoring and respecting Mother Earth and Father Sky. Both Crazy Horse and Sitting Bull were murdered primarily, for their unwavering commitment to honor their American Native way of life. Fool Bull tenaciously weaved his traditional medicine spiritual ways through the reservation world of corrupt politics of the Bureau of Indian Affairs.

This weaving enabled his descendants of Sioux spiritual traditions such as, Leslie Fool Bull and Richard ‘He Who Has the Foundation’ Swallow to survive and blossom in the reservation world.

You can read the Foundational Documents of this union here. 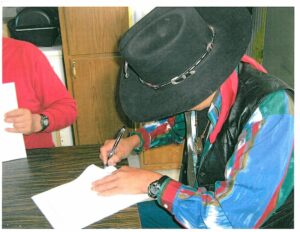 Richard “He Who Has the Foundation” Swallow, signing the document uniting the two tribes. 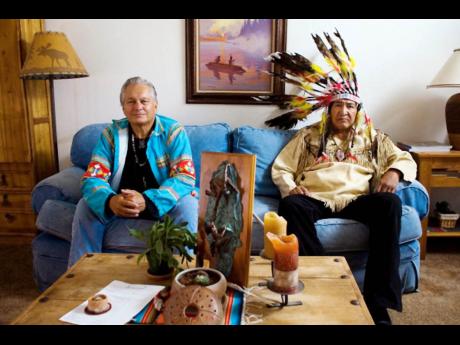 James Mooney and Richard “He Who Has the Foundation” Swallow

Osceola, Quanah Parker, and James Mooney, Ethnologist maintained the Oklevueha Seminole spiritual traditions, in secret, on and off of Federally Recognized Indian Reservations.  The reason for the secrecy was if the people that carried these traditions were revealed, they would have been murdered.  In the 1800’s, there were bounties placed on all Seminoles that did not reside on federally recognized Indian reservations.  If a government agent of the United States were to kill, and turn in a severed Seminole head, they would receive as much as $200.00. In the 1800’s, this was a massive amount of money.

With these understandings, one may surmise that the reason for the survival of these indigenous spiritual traditions relied on the ability of the followers to listen to and follow the promptings of the heart in the ‘moment’.  They could not have survived the onslaught of atrocities with one set of practices for each one of their indigenous ceremonies. It is also reasonable to conclude that women (Matriarch) are the true caretakers of the indigenous medicines, and the men (Patriarch) are the protector of the medicines.