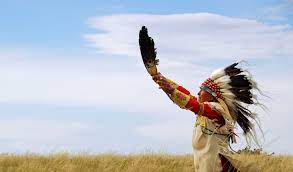 Oklevueha Native American Church has had to make a legal stand against a multitude of judicial incursions in order to preserve our civil liberties in practicing our religion. In all cases, the Church overcame and prevailed, and it has been proven that the Oklevueha Native American Church is a bone fide and “real” church, deserving the same First Amendment Protections as every other church worshipping in the United States. 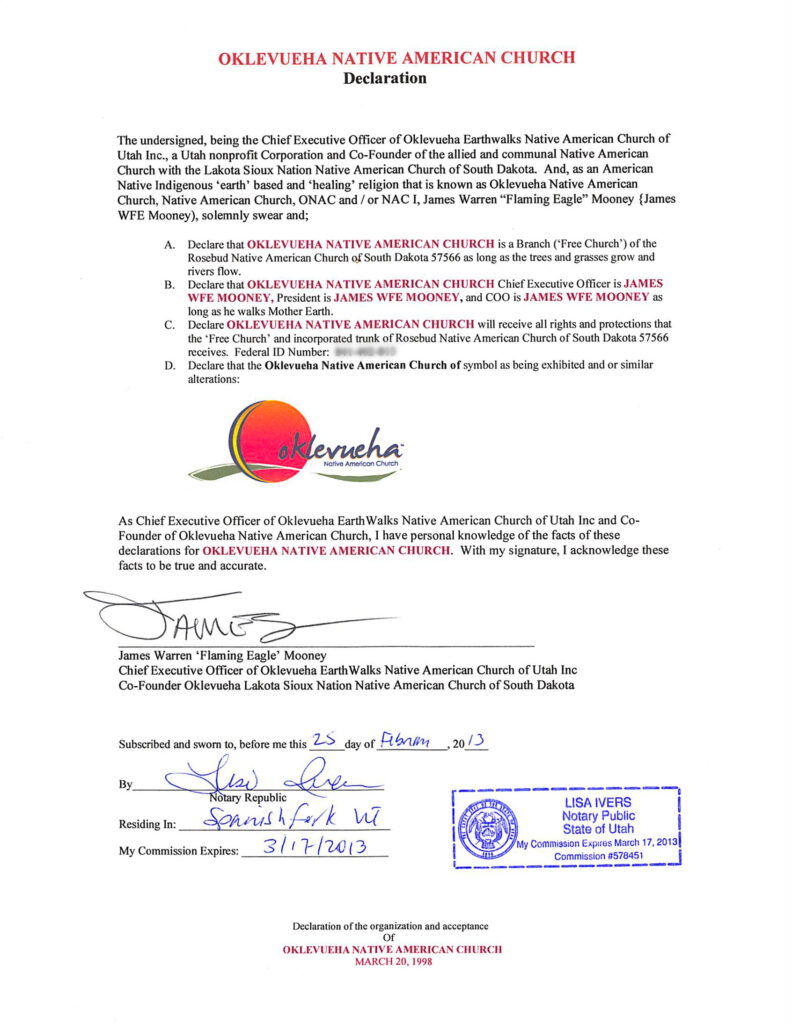 In April of 1997 Oklevueha Native American church filed with the state of Utah to be recognized as a church and was granted a Utah State registration number, State of Utah Religious/Charitable Sales Tax Exemption status, and Federal Employee ID number. The IRS does not require a Native American church to have a Federal Tax ID number, however, the banking industry requires a Federal ID number in order to open an account.

However, even with these protections in place, Oklevueha Native American Mother Church was raided by Utah Sheriff’s Departments on October 10, 2000. The warrant used by the Sheriff’s Department specifically named James Mooney and his property as the subject of the warrant. However, the property in question was not registered to or owned by James Mooney but was registered and owned by Oklevueha Native American Church, where the Mooney family just happened to reside. The Utah Attorney General’s office, led by Kay Bryson, failed to advise the warrant-issuing judge that the warrant being petitioned was for a federally recognized church. What appears to be a small error in naming the wrong person for the warrant, in effect neutralized the warrant, as it was made on false premises. Additionally, federal law states very clearly once the court is made aware that the warrant is for a church, then the petitioned party is demanded to prove to the court that said church meets “A Government Compelling Interest Standard”[1].  None of these steps were taken, the raid continued.

The documents listed in the warrant claimed the church was in possession of Schedule 1 drugs: namely peyote. The sheriff officers took all the church’s sacred medicine items, including two sacred chanupas (peace pipes) and all their medicine (peyote). A month later the two co-founders and Medicine People, James and Linda Mooney, were arrested, booked, and incarcerated.

Without detailing every legal action taken to protect Oklevueha Native American Church, the Mooney’s case was bumped up to the Utah Supreme Court. The Utah Supreme Court wrote[2]: “We reverse the decision of the (4th District) Court. We hold that the federal Religious Peyote Exemption found at 21 C.F.R. § 1307.31[3] has been incorporated into the Utah Controlled Substances Act. Although the statutory language governing incorporation is ambiguous, we interpret the Act in a manner that avoids a conflict with federal law and does not risk depriving the Mooneys of their constitutional rights to due process.”

However, despite of the Utah Supreme Court’s decision, our churches, medicine people, and members are still being harassed and arrested for having in their possession “illegal drugs.” Every member of Oklevueha Native American Church has a membership card which shows they are protected by various laws of the land.

Enacted by Congress in 2000, The Religious Land Use and Institutionalized Persons Act of 2000[4] safeguards the religious freedom of houses of worship in the land-use context and institutionalized persons by restoring courts’ ability to apply a strict standard for reviewing laws that substantially burden religious exercise.  In the land-use context, RLUIPA also contains an Equal Terms provision that prohibits local governments from enacting or applying land use regulations that treat religious groups less favorably than non-religious groups.

RLUIPA (The Religious Land Use and Institutionalized Persons Act of 2000 clearly and concisely states that all United States Judicial officials as a matter of law are obligated to honor Native American Church members access to American Native Indigenous Sacred Ceremonial Grounds and/or the use or transportation of ONAC Sacraments (plants, cactus, herbs, mushrooms, etc.) State and Federal government officials are required to protect the constitutional right to Freedom of Religion for Oklevueha Native American Church and its members, as well as every other bone fide church. This law went into effect September 22, 2002, before the raid on Oklevueha Native American Church.

As shown above in the Mooney vs. Utah, these unanimous higher federal and state court rulings and law establishes an abundantly clear understanding that all members of a Native American Church[5] have the constitutional rights to worship with any and all earth-based Sacraments, especially Peyote.[6] With this understanding, should an ONAC Member be stopped by any Law Enforcement Officer while possessing a Native American Church Sacrament, he or she is encouraged to submit their ONAC Membership Card with their driver’s license. All members are encouraged to be compliant and be respectful of the law enforcement officers.

With this information, we humbly ask that you, as our legislators, disseminate this information regarding the legalities of the Oklevueha Native American Church to all state officials throughout the United States, so that the legal and sacred medicines can be carried to ceremonial sites or to members requiring medicine, assuming they are in compliance with ONAC’s Codes of Ethics[7] and Codes of Conduct[8], and comply with the church established limits on personal use[9] and cultivation limits [10]. ONAC uses a stringent vetting process for all of our medicine people and medicine cultivators. There are no amateurs among our medicine people, this holds true for those in North and South American indigenous cultures. Everyone who comes to ONAC must be vetted and interviewed by the Council of Advisors, a group of men and women who work for ONAC Mother Church and are qualified to make such decisions.

Additionally, it needs to be made clear to all law enforcement agencies across the country, as well as all courts, that judicial agencies must prove to courts that their petition for a warrant to raid property and/or booked and incarcerated spiritual leaders of any church must prove that the actives provided to its members meets a Government Compelling Interest standard. In the case of Mr. DeArmon and Ms. Smith, and the others, there was absolutely no government compelling interest to detain and arrest them. We have multitude of these cases around the country:

Joy Graves has a case where she was sending cannabis medicine in the US mail and it was stopped and held. Joy filed a case where Matt Pappas Attorney almost had the case in a winning position until he failed to carry through.

OUTCOME: Brandon took a plea bargain, even after James Mooney flew to Michigan to testify on his defense, however the judge and prosecutor would not let James testify, thus his need to plea bargain.

In addition to the case against the Mooneys and Oklevueha Native American Church above, the following cases have been successfully argued and won.

UNITED STATES DISTRICT COURT FOR THE DISTRICT OF HAWAII

OUTCOME: All charges were dropped

Joy was charged with growing cannabis. James stepped in as leader of Oklevueha Native American Church bringing proof of legalities protecting Ms. Graves and her church.

OUTCOME: She was exonerated of all charges[18]