James Mooney, anthropologist, was born in Richmond, Indiana, the son of James Mooney and Ellen Devlin, Irish immigrants. His father died soon after his birth. His mother, who made her living as a housekeeper, supplemented her son’s public school education with the legends of her native County Meath. Her stories were about the former grandeur of the Irish culture, and memories of alien British rule. She also raised him to be an ardent Catholic.

After graduating from high school in 1878, Mooney taught public school for one year, and then joined the staff of the Richmond Palladium. Charles Stewart Parnell, who toured the United States in late 1879 on behalf of the newly formed National Land League of Ireland, stirred Mooney’s passion and idealism. Mooney helped organize a local Richmond chapter of the Land League and served as its first secretary. When the English Parliament passed land reform measures shortly thereafter, much of the original enthusiasm for the league dissipated. Mooney, late in 1884 tried to gain employment at the Smithsonian Institution’s Bureau of Ethnology (later renamed the Bureau of American Ethnology), which had been founded in 1879 to organize anthropological knowledge in the United States and provide the national government with solutions to the vexing “Indian problem.” 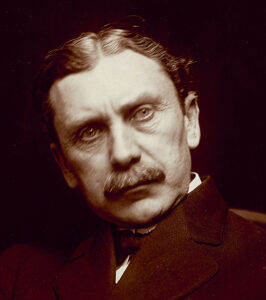 A former mayor of Richmond introduced Mooney by letter, to Major John Wesley Powell, the director, as “the young and devoted anthropological Irishman.” Powell had no position to offer. Mooney visited Washington, D.C. in April 1885, ostensibly on his way to explore the upper Amazon River. Powell viewed the work Mooney had begun as a hobby ten years before, principally a tribal “synonymy” (a dictionary of tribal names and their synonyms. This eventually grew into the multi-authored Handbook of American Indians North of Mexico [1907]) and a very large and detailed map locating current and former homelands of North American Indians.  He hired Mooney on the spot. Mooney became a resident of Washington, D.C. where he made his home and eventually married Ione Lee Gaut in 1897. They had six children.

Mooney remained deskbound at the Smithsonian for his first two years in Washington. Under the tutelage of Dr. Washington Matthews, curator of the Army Medical Museum, contributor to bureau publications, and an Irish expatriate, Mooney learned that to be a successful ethnologist one must first gain the complete confidence of the informant. To achieve this confidence, one must respect the informant’s culture in all its particulars.

When stationed among the Sioux, and later among the Navajos, Matthews had learned their languages. Under Matthew’s influence, Mooney was meticulous in his research, and would learn Cherokee, Kiowa, and some Comanche. He began his field studies during the summer of 1887 among the Eastern Cherokees of the Great Smoky Mountains. Years of research that followed among the Cherokees of eastern Tennessee and western North Carolina (who had escaped forced removal in the 1840s) led to the publication of the monographs “Sacred Formulas of the Cherokees” (Seventh Annual Report of the Bureau of Ethnology [1891]), “Myths of the Cherokee” (Nineteenth Annual Report of the Bureau of American Ethnology [1900]), and the posthumous The Swimmer Manuscript: Cherokee Sacred Formulas and Medicinal Prescriptions (1932), named for one of the shamans and traditional healers who resisted forced assimilation and preserved Cherokee traditions. As Mooney’s biographer, George Ellison has suggested, no greater testimonial can be offered to Mooney than the reliance placed on his work by anthropologists, general readers, and especially the various North American Indians he so diligently chronicled. In the 1970’s, Richard Mack Bettis, President of the Tulsa (Oklahoma) Cherokee Community, stated that he and his contemporaries grew up holding the writings of James Mooney on the Cherokees in a reverence that is usually reserved for scripture.

Mooney is, however, best remembered for his research and writing on the Ghost Dance Religion. When he visited the Indian Territory in late 1890 to complete research among the western division of the Cherokees, he witnessed the ghost dance in full performance at the Cheyenne and Arapaho reservation. He spent the next three years conducting research throughout the West, and writing on one of the greatest social and religious movements to affect American Indians in the nineteenth century. Mooney’s “The Ghost Dance Religion and the Sioux Outbreak of 1890” (Fourteenth Annual Report of the Bureau of Ethnology, part 2 [1896]), is generally considered his greatest work, and has earned him an enduring reputation among anthropologists and historians. It was the first accurate history of the religion, and it has served generations of ethnohistorians as a major source of evidence about the religion and the Sioux rebellion. In the book, Mooney came very close to articulating a theory of revitalization expounded by anthropologists during the second half of the twentieth century. In lyrical prose, he compared the religion of the Paiute prophet Wovoka to other religions, including Christianity.

Please click the picture above to read about Mooney’s work with indigenous Americans and peyote.

While in the Indian Territory in 1890-1891, Mooney also encountered the burgeoning Peyote Religion at the Kiowa and Comanche reservation, detecting what he believed to be a heraldic system among plains Indians borne out by designs that appeared on tipis and warrior shields, and found pictographic calendars of the Kiowas. A Kiowa storyteller would use the pictographs on his calendar as a sort of mnemonic device to recall the memories of that particular year or “winter.” The Kiowa calendars (and those found among the Sioux about the same time) exposed the falsity of the assertion that American Indians were people without a “written” history.

Following completion of his manuscript on the Ghost Dance, he finished his “Calendar History of the Kiowa Indians” (Seventeenth Annual Report of the Bureau of American Ethnology, part 2 [1898]). Along with his other research interests, he would continually return to his heraldry studies and the Peyote Religion during the next thirty years, though he never finished books on either subject. Indeed, his sympathetic treatment of the peyote ritual led to his being barred from conducting research on Indian reservations.  In 1918, he assisted in the chartering of the Native American Church of Oklahoma, an act that defied federal policy aimed to outlaw the use of peyote. For that reason, the Secretary of the Interior issued the ban of his research. He tried unsuccessfully for the remaining three years of his life to get the ban lifted. He died at his home in Washington, D.C., from the cumulative effects of heart disease that had first appeared in the early 1890s. A member of the first generation of professional anthropologists, he left behind a wealth of ethnographical and historical data.

There are no James Mooney papers. The majority of his correspondence and all of his unfinished manuscripts and research notes may be found in the National Anthropological Archives, National Museum of Natural History, Smithsonian Institution, Washington, D.C. Mooney’s other major writings include “The Cheyenne Indians,” Memoirs of the American Anthropological Association, 1905-1906 (1908), and “The Aboriginal Population of America North of Mexico,” Smithsonian Institution Miscellaneous Collections, no. 52 (1928). A splendid, short biographical introduction by George Ellison is in James Mooney, History, Myths, and Sacred Formulas of the Cherokees (1992). Two biographies of Mooney exist, one by William Munn Colby, “Routes to Rainey Mountain: A Biography of James Mooney, Ethnologist” (Ph.D. diss., Univ. of Wisconsin, 1977), and L. G. Moses, The Indian Man: A Biography of James Mooney (1984). See also Curtis M. Hinsley, Jr., Savages and Scientists: The Smithsonian Institution and the Development of American Anthropology, 1846-1910 (1981). An obituary is in American Anthropologist 24