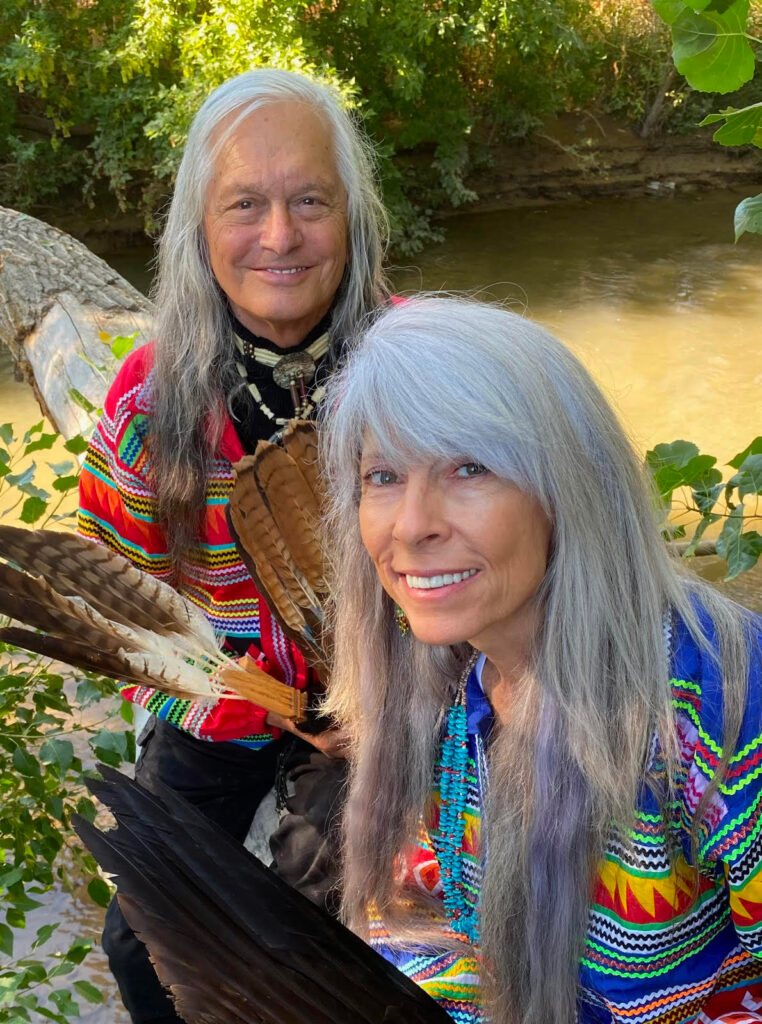 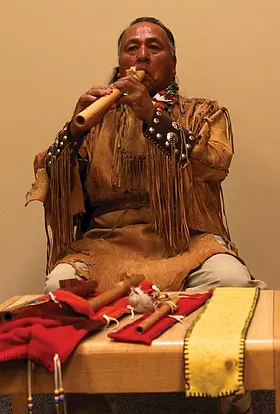 James came to the medicine through an early morning telephone call with his tribal chief, Little Dove. After a long road of avoiding this path, but in his forties, James went through extensive training over ten years with many different medicine people. While practicing his medicine, James was called to serve at the Gunnison State Prison in Utah, to head up a program working with the incarcerated Native Americans. Non-natives also participated in these ceremonies. He built a sweat lodge on the prison property and worked with these men one on one and in sacred Pipe Ceremonies to bring them back to place of balance. Linda assisted him in ceremony, providing the much needed feminine influence on these men.

Soon, the Mooneys were working with people outside of the prison. They began holding medicine ceremonies, pipe ceremonies, breath ceremonies, and others to serve the community.

Eventually, the Mooneys moved to south Utah County in Utah. There, even more people came to receive the healing benefits of the ceremonies.

One of the tremendous benefits of the medicine is how it assists those who are suffering from addiction. People would come and stay on their property, working with James and Linda on a daily basis. The recovery rate was astounding.

The Mooneys have always been very open about what they were doing, and even contacted local law enforcement to inform them about Oklevueha Native American Church so that they were aware of what was transpiring.

Despite law enforcement’s original opinion that the Mooneys were doing no harm, corrupt forces in Utah instigated an investigation into the sacred medicines the Mooneys worked with, and eventually served an illegal search warrant on the church property (one must have a government compelling interest standard and a federal warrant to search a church.)  During the raid James requested to see the warrant.  The warrant was made out for James Mooney, however, the property was owned by Oklevueha Native American Church. He alerted Robinson, who was in charge, that it was an illegal search. James brought up the fact that RLIUPA had passed, protecting the church. Robinson called into Kay Bryson, the Utah County Attorney, who told them to continue the raid. The Utah County law enforcement personnel who raided the church removed all of the sacred medicine tools, sacred medicine (peyote), and their computers and other files.

This started as a civil case but was bumped up to Federal (Utah) when Judge Stott refused to dismiss the case.
The Utah Supreme Court ruled in favor of the Mooneys and Oklevueha Native American Church, and ordered the charges dropped.
Atty. General Shurtleff appealed the Supreme Court ruling claiming the state laws were out of step with the federal law.
He then petitioned to file a bill of attainder law as he was told he had no rights to appeal. State Representative Kurt Oda went to the Utah State Congress to write a bill of attainder law stating only members of a recognized tribe could participate in peyote ceremonies, (illegal under federal law) as a special interest, and persuaded the DEA and special interest groups and falsified the reports.
During this time, Linda was jailed for one week, and James for three, in the hopes for a plea bargin.
After release, they were put on a strict drug testing program.  Their supervisor said “People want you.” During this time, the testing place called to report Linda had not shown up for one of the tests, and would be sent back in violation. The Mooneys produced receipt proof that she had not missed any.
After six months, the federal defenders office had proof that all accusations that were made were illegal, and the government was shown to be complicit in denyings civil liberties since 1918. These facts could undermine the US Judicial system.
The Federal court dropped all charges, and had the Mooney’s sign a paper with requests made one of which they would not have anything to do with medicine until they joined a federalized tribe. (against already established law). No plea bargins were made.

Several weeks after this raid, James and Linda Mooney were arrested by Utah County Sheriffs and were remanded to jail. Thanks to the kindness of several members, the Mooneys were able to make bail.

As the case with the state of Utah continued to move forward, the judge presiding over the hearings determined that this should not be prosecuted in state courts, and escalated this to the Federal courts.

In the Mooney’s Federal case, agents of the state prosecuting attorney’s office withheld exculpatory evidence from the Federal state of Utah Grand Jury. The state of Utah, with the advisory support of the Bureau of Indian Affairs (BIA), prompted federal indictments that eventually became a failed attempt to discredit the Mooneys authenticity as being bona fide Native American Medicine people. Because of these illegal acts committed by agents of the state of Utah and Federal Government which included committing perjury in a federal court hearing, submitting tainted interpretations of interviews and withholding exculpatory evidence from the state of Utah Federal Grand Jury, indictments were signed against the Mooneys.

The Mooneys  were again arrested and jailed with the threat of life imprisonment should they be convicted.  After more than six months of investigative efforts (Due Diligence)  by Utah Federal Defenders Office, the discoveries of the perjured statements and other illegal activities brought about by state and federal agents were exposed.

Because of these questionable acts by the State of Utah and Federal judicial agents, the federal prosecuting attorneys, with the support of the Utah Federal Defenders Office pleaded with federal court judge Ted Stewart to dismiss all indictments, a few days prior to a scheduled evidential hearing, primarily to keep these facts from entering federal court records.  For the first time in the history of the United States judicial system a motion to dismiss was requested and granted prior to a federally scheduled evidential hearing.

The full text of the Utah Supreme Court ruling in favor of the Mooneys is found here.

Now that the Mooneys had obtained a legal ruling in favor of Oklevueha, they began building the church and extending its reach through the creation of independent branches, with other medicine people working with sacred medicines or ceremonies.

As Oklevueha continues to grow, the Mooneys are hopeful that their legal issues and the resulting precedents will enable them to continue to spread Oklevueha to all parts of the United States. There are many people who need this help, and it is the Mooneys desire and mission to bring healing and spiritual connection to all who seek.

James Mooney retired from active medicine work and named Linda Mooney as President of the church. Linda continues to lead the church, assisted by a Council of Advisors and a Council of Matriarchs, founded on the Seven Governing Values of Oklevueha, and deep meditation and prayer. The aim is to always follow the will of Creator while leading this church into a peaceful future. 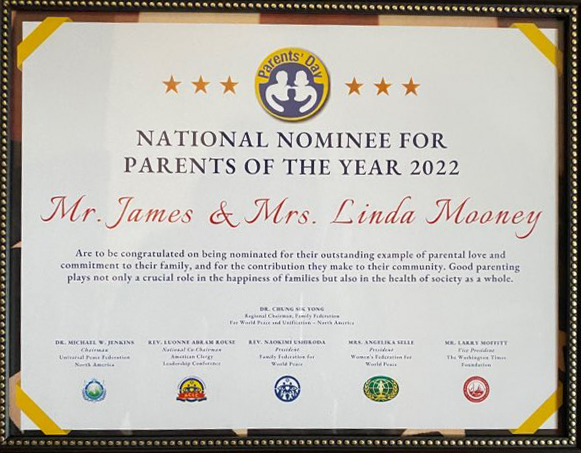 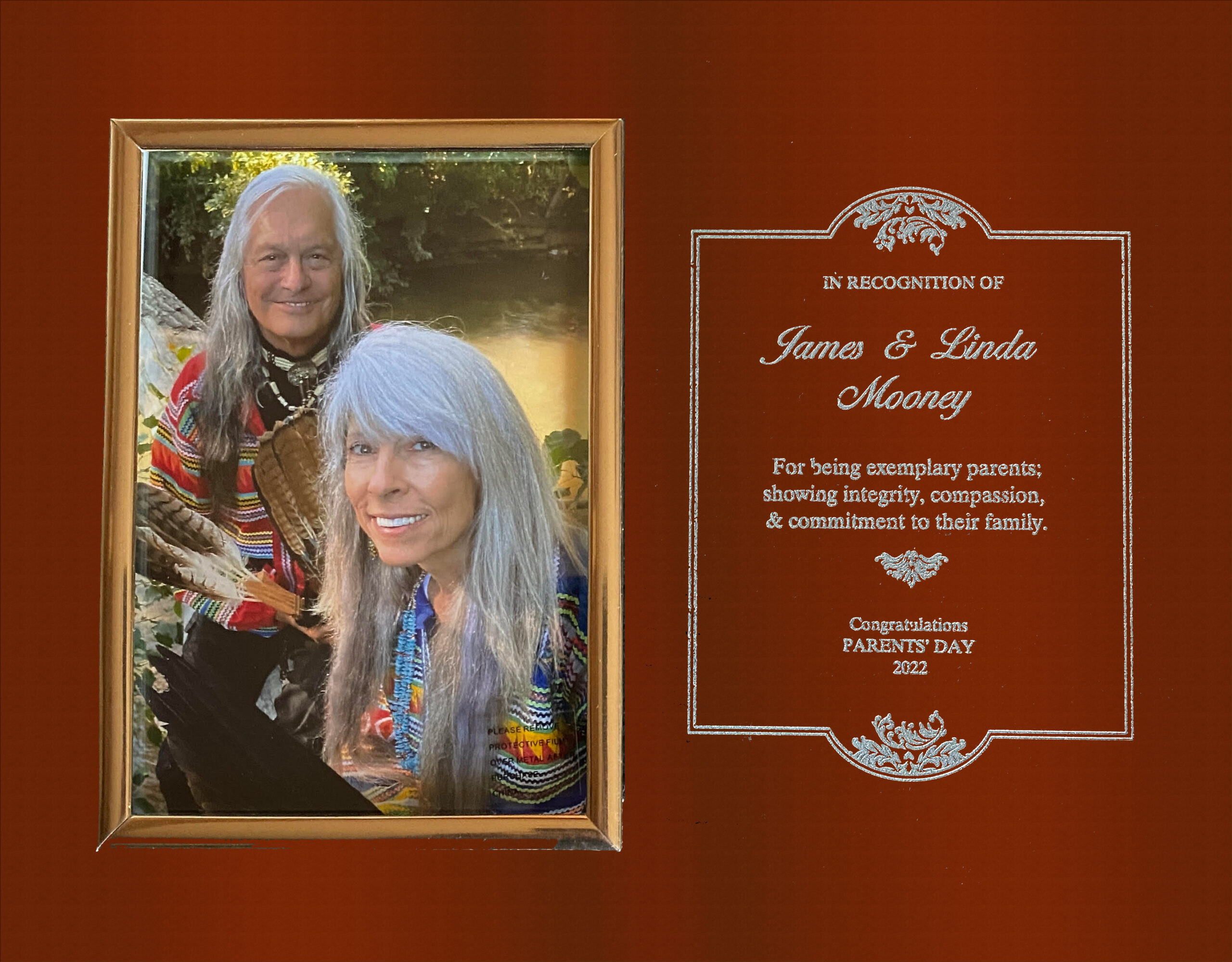 This is a great honor for them, and very well deserved. Between them they have raised 15 children.

The picture on the left shows James and Linda Mooney standing with Reverend Michael Stowall, of the Family Federation for World Peace and Unification (far left) and Timpanogos Tribal Chief, Mary Murdoc Meyers. 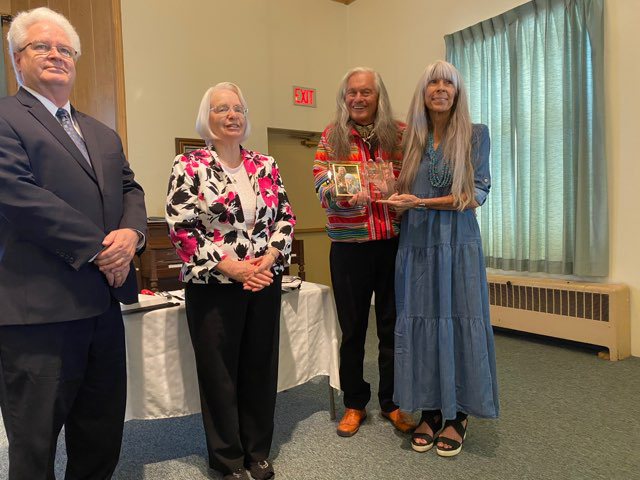 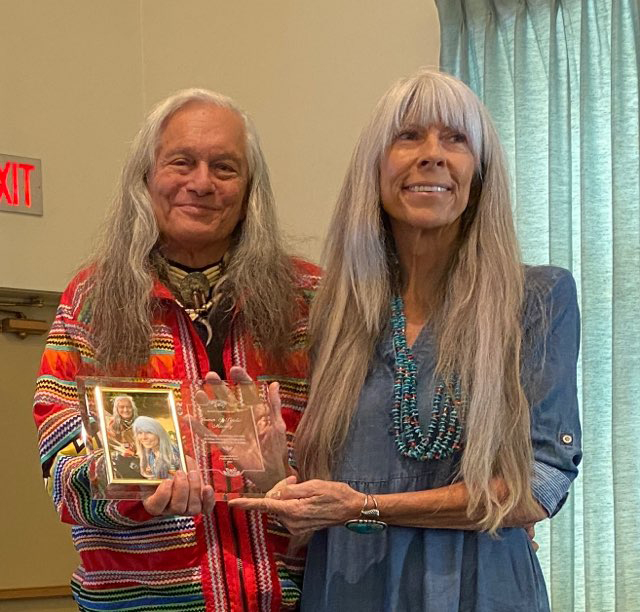 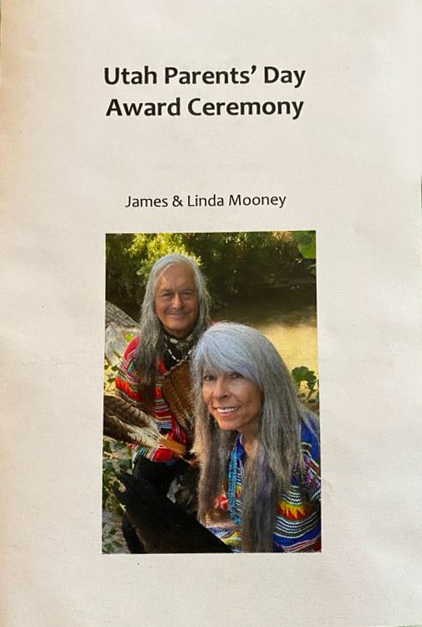