Working to Save Utah Lake 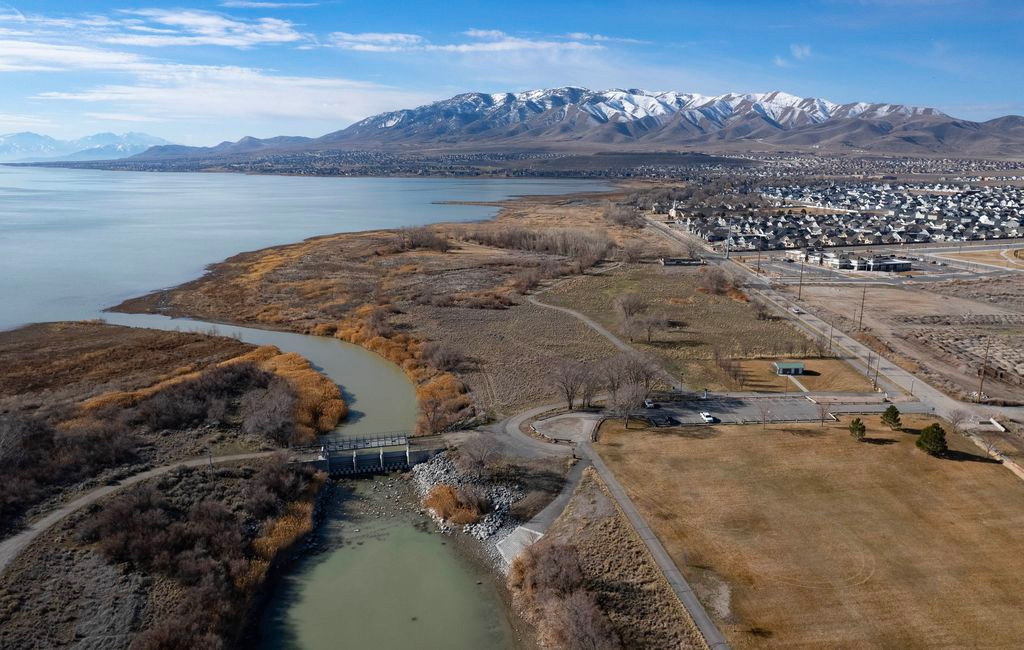 (Francisco Kjolseth | The Salt Lake Tribune) Utah Lake outlet gates in Saratoga Springs, used to divert water to the Jordan River, are pictured on Friday, March 18, 2022. A proposal to dredge the lake would violate the Utah Constitution, according to a new report to the Legislature.

In a bombshell announcement Wednesday, Utah state land managers said crucial elements of the proposed Utah Lake dredging project are not constitutional because privatizing the lake bed, considered “sovereign land,” would run afoul of the state’s duty to manage such land in the “public trust.”

The Utah company has claimed for the past five years that its plan to dredge a billion cubic yards of lake bed sediments would result in numerous public benefits — while also creating up to 20,000 acres of developable real estate. The company says the lake will have increased water supply, improved water quality, increased recreational opportunities and navigability and restored wildlife habitat.

But over that time, LRS has yet to submit scientific data supporting those claims, Barnes told the Natural Resources, Agriculture and Environment Interim Committee.

The company is proposing to spend $6.5 billion on its Utah Lake Restoration Project (ULRP), and in return, the state would give it some of the artificial islands to sell as “shovel ready” real estate. The stated goal is to fix the 150-square-mile lake that has become a eutrophic soup filled with invasive organisms after a century of neglect.

LRS’s promotional materials describe build-out scenarios with nearly 170,000 residential and 27,450 commercial units — essentially enough to support a city of half a million people. In pitches to potential funders, including the federal Environmental Protection Agency, the company characterizes the state as a “partner.”

That’s an odd role for a governmental player that has permitting oversight of what would be one of the largest dredging projects ever undertaken.

Now state officials are alerting lawmakers of their serious reservations about the legality of the project’s key feature: “disposal” of the lake bed.

“The proposal is unconstitutional and is not legally sound,” Barnes said. “I understand that this is a case of first impression, but this project presents a risk to the state of Utah. There is a possibility of permanent loss of sovereign land to a private entity. The exposure to the state, based on a fiduciary duty attributable to sovereign land, [is] an impermissible infringement on public access to a state asset.”

Under long-standing legal precedents, the beds of navigable waterways are inherently public and must be managed in the “public trust” in perpetuity. This typically means they should always remain available for public access or serve some public purpose. Barnes announcement suggests that building island subdivisions does not qualify.

LRS has argued its proposal squares with the public trust thanks to the benefits of deepening the lake by 7 feet and using the spoils to create new dry land. Indeed, the proposal garnered the support of the Utah Governor’s Office of Economic Opportunity and every member of the state’s congressional delegation.

“The project will result in a deeper, clearer lake, dotted with Islands for recreation, conservation, and world class water-front living which will sequester the nutrient loaded sediments and allow for restoration of the lake’s natural ecosystem and health of its waters,” the delegation wrote in a joint May 21, 2021, letter to the EPA in support of LRS’s request for hundreds of millions in public financing.

“Over 30 billion gallons of water conservation savings could be produced through reduced evaporation and removal of miles of invasive plant species,” the letter continued. “The ULRP proposes to implement a comprehensive plan to restore Utah Lake and provide economically and environmentally responsible development to fund the extensive restoration investment on Utah Lake.”

That all might be fine and desirable, but is it constitutional? At DNR’s insistence, the company produced a legal memo explaining its reasoning behind the proposed disposal of sovereign land.

“The memo submitted has undergone extensive legal review by the [Utah] Attorney General’s Office, who is our legal counsel,” Barnes said. “I have been advised by our legal counsel that there are material and substantive legal issues with the proposal submitted by Lake Restoration Solutions and that it is detrimental to the state of Utah and the public trust.”

Barnes went on to say work by DNR and federal agencies to fix the long-suffering lake’s ecological problems is working and deserves continued support.

“There’s the misconception that Utah Lake is getting worse,” she said. “My division [of Forestry, Fire and State Lands] is currently taking management actions to improve the quality of Utah Lake. Over time we’ve seen Utah Lake improving. …. What we need to continue to do is we need to look at all options to enhance the quality of Utah lake and to make it a functioning ecosystem. It’s important that we start taking proactive measures on the lake and not be reactive.”

Although DNR’s position now appears to doom the project, Barnes stressed her agency is not making any recommendations at this time.

Barnes’ announcement was met with silence from the committee, whose members have been strong supporters of dredging the lake and pushed the 2018 legislation that put the proposal in motion. Co-chair Rep. Keven Stratton, an Orem Republican who has become a skeptic of dredging the lake, moved on to the next item on the committee’s busy agenda with only a brief comment.

“I recognize that this is a big task. And I would just say as we look at Utah Lake, that the effort is to become its best version,” he said. “This is one option among others.”

LRS executives did not immediately respond to requests for comment and for the memo it had submitted to state officials. Meanwhile, the project continues to move along for LRS, which on Wednesday announced the U.S. Army Corps of Engineers selected Anchor QEA Services as the third-party contractor to conduct an environmental analysis.